Stan Crichton: Making it count since 1953 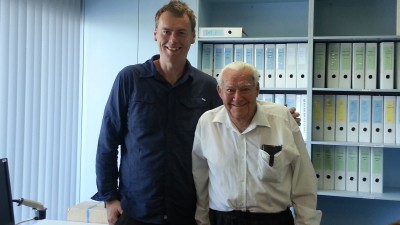 Meet Stan Crichton, overseeing the 26 staff conducting the Hunter & Patterson fresh scrutiny (having first been OIC at a Pre-Poll Centre, then a PPLO on election day).

Stan tells me he started working in elections SIXTY YEARS ago, as a dec issuing officer in the NSW State Election in 1953. Now a boyish 87, he’s slightly cagey about his future AEC career ambitions…. but I definitely wouldn’t bet against seeing him hard at it again in 2016.

Meeting Stan, and seeing the genuine love and affection he gets from the team here, is a really lovely reminder of the human, community foundation of our present voting system… thousands of good, unheralded people working quietly and diligently towards the goal of making every one of their neighbor’s votes count. Wherever technology may take us I truly hope we never loose that… its timeless and really special.

It seems fitting that Stan’s boss, DRO Ruth Lynch, was surely about the youngest ever when she first took the job on at the age of 23 (though no doubt growing up in an AEC family was helpful!). Working alongside her in their shared office is the alarmingly highly qualified DRO Kath Gleeson, PhD… watch out for these guys AEC, these unassuming women are both pretty amazing separately, together a formidable team, and run a genuinely impressive operation. Expect to hear more from both of them.

What a great way to end my last day working on Federal Election 2013. Thanks Hunter-Paterson team!

Is Stan the most venerable living treasure in Australasian elections? Was Ruth the youngest-ever DRO? Let us know!