Film-making for the blind 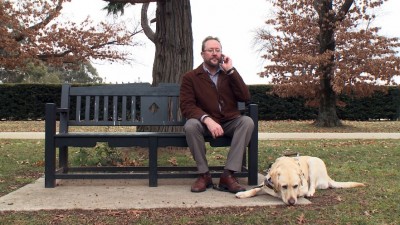 Alright, I’ll admit it… making a film for the blind did sound a bit like some sort of strange  joke when the AEC first raised it. We go to great lengths to shoot 25 pretty images every single second, right?

Turns out (as usual!) my first reaction was quite misguided. For several reasons video, and DVD specifically, can be an excellent medium for speaking to the Blind and Low Vision community.

First, a large portion of this group do have at least some vision. In a number of cases acuity and/or field of view is considerably reduced, but (with the help of sound) TV still works quite well. Justin Simpson, my guide-dog-using lawyer, adviser and collaborator on this project enjoys his large-screen TV and extensive DVD collection immensely.

Second, with thought we found it very possible to use a range of other filmmaking devices to tell this story in a way where it could be understood entirely just by hearing it. Editor Annie Collins was, for example, able to use a voice on a telephone switching in and out of “telephone sound” equalisation to clearly let the audience know which party to the conversation the screen was showing at any given moment. With the nuts and bolts clarified in this way all the usual advantages of documentary film became available… empathy with people the audience can closely identify with, telling true, meaningful stories. As usual, the perfect medium for building trust, strengthening relationships and sustaining engagement.

Third, many people with vision impairment live with other people who don’t. Often these people are an important enabler in their participation in events such as elections, so its really important that they are a part of our audience. A video presentation that works for both sighted and non-sighted audience is ideal.

This film was designed to talk to BLV voters about the new system of voting that has been introduced for the upcoming federal election. It’s extremely important to BLV voters to have confidence in both their confidentiality and independence when they cast their ballot, and the new telephone voting – while not yet the ultimate solution – is an improvement on previous systems, and a strong basis for ongoing partnership between the BLV community and the AEC.