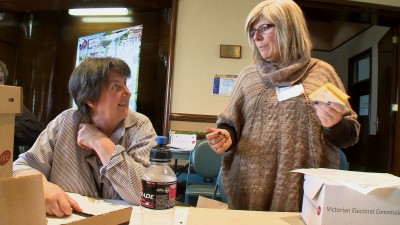 We have just supplied the Victorian Electoral Commission with DVD versions of a production we completed for them earlier this year in which I followed three Returning Officers through the 2012 Local Body elections, which is right now being used in the induction and training of new senior election managers for the upcoming State elections.

This was a really interesting project to work on, all about management, and in particular the way in which a manager’s concept of their role affects their approach to their work and ultimately their effectiveness. Moving repeatedly between different Returning Offices nominally doing exactly the same things but actually operating rather differently is kind of like one of those “Spot the Five Differences” kid’s picture-book games; certain key issues really do start standing out.

For me the big takeaway is that there is a very important difference between how the job sounds on paper and how it actually is… essentially, it can sound fairly high-falutin’ and executive-y, but very clearly seems to be done best by people who regularly roll their sleeves up and get physically stuck in. I think this is a critical success factor for two reasons: it nurtures the correct practical, get-the-job-done-right team dynamic required for success, and because at heart being an RO is primarily a practical matter of process management and its just not possible to lead them really well if you don’t have the serious understanding that comes from hands-on experience.

Another issue that has come to interest me considerably working through this project arises from that gap mentioned above between the way the job reads and the way it is best approached… and here I will get slightly controversial for a moment! It seems to me there is a definite risk that some candidates attracted to the job as generally advertised may be drawn to the flash-sounding, politician-hobnobbing, corner-office sound of it, and will find themselves terribly unsuited to doing it well… while on the other hand some potential candidates who would be extremely good at it are put off by exactly the same things. And these two groups will be likely (I would boldly suggest) to be weighted somewhat male | female, respectively.

I’m really pleased to note that the VEC’s awesome Liz Williams and Michelle Templeton have spotted this issue too, and developed a clever recruitment strategy designed to make the role sound less intimidating, and to put it in front of excellent candidates who may not naturally think of themselves as “senior managers”. I’m sure as recruitment and training concludes the quality of their new Returning Officers will be a great rewarded for this smart initiative.

As we are starting to do quite routinely in taking advantage of emerging distribution opportunities, the DVD includes two variations of the film. The first film is a version to use during face-to-face training which is the full-length 30 minute film going right through the election process. It has enough process detail to give a good understanding of each step. The second film is a version for recruitment/induction which is a five-minute recut designed to give a more thematic general feel for the type of job it is. We’ve added a short animation giving a stylized overview of the general timeline of an RO’s tasks up to, during and after election day.